How to Play Caribbean Stud Poker 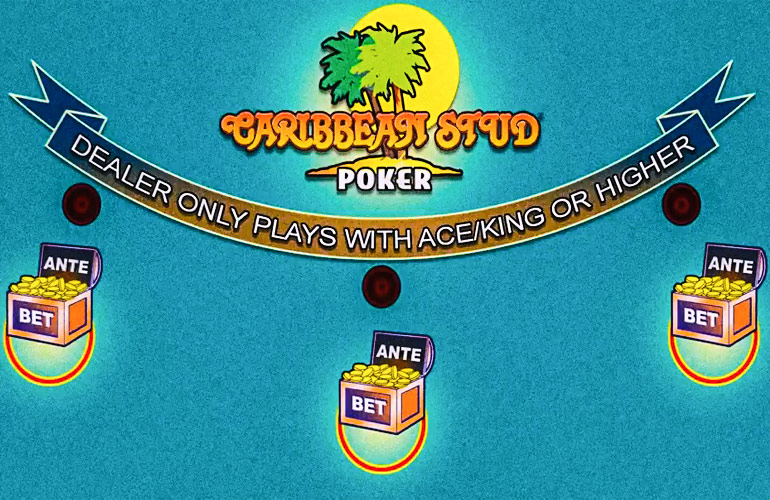 Interestingly, Caribbean Stud is rather new compared to the other versions that date even back to the nineteenth century.

Before the game starts, each of the players at the table will place an ante or a so-called forced bet. They will have to place their bets before the croupier declares that there are no additional bets. Furthermore, they could also opt to participate in a progressive jackpot, and there will usually be a separate area for betting on this feature.

Each of the remaining players will have two options. They can either bet or fold depending on their five cards. If they fold, they will lose the ante and a progressive bet if they placed one. On the other hand, if the players opt to continue, they will have to place a bet that is generally double the ante.

For example, if the ante is ten dollars, and if they placed a one-dollar bet for a progressive, they would lose eleven dollars if they fold. However, if they continue, they will have to place an additional ten-dollar chip on the table. After each of the players has finished with their actions, the dealer will reveal their four cards and continue to the next phase or stage of the game.

One of the interesting things is that the dealer will have to qualify for the showdown. This means that they will have to have either an ace and a king in their combination, or two pairs or higher. If the croupier fails to qualify, the players will receive a payout for the ante one to one, and their bet will be returned.

However, if the dealer manages to qualify, they will proceed to compare their cards to each of the players that bet on their own cards.

When it comes to the showdown, the rules are the same as for any other type of poker. While there are different variations, they are usually for the progressive part of the game.

However, if the dealer qualifies for the second round, meaning that they have either a pair or higher, they will compare their hand to each of the remaining players’ hands. If one of the players beat the croupier’s hand, they will win double the ante, plus additional bonus depending on their hand.

These payouts will only apply if the dealer manages to qualify for the showdown and if the player beats them with one of these hands.

In Caribbean Poker, a progressive jackpot has an important role. Furthermore, each player can opt to place a different bet where they will get a chance to win big. This additional bet is usually one dollar, and to win the jackpot the player will need to get one of the bottom five-card combinations. This is also one of the main differences between versions of the Caribbean Stud.

Whenever a player places a bet on the progressive jackpot, a portion of the bet goes to increasing the amount. Since many players are trying to win this, the total prize can reach unbelievable amounts. After one fortunate winner manages to take the jackpot, it will reset to the lower bar, and start increasing all over again. Interestingly, the only criterion is for the players to get a flush or stronger. They don’t need to win against the dealer, and it is possible to win progressive even if you lose the round.

The casino will usually pay an entire amount if the player is lucky enough to get a Royal Flush. Furthermore, for a straight flush, a player will win ten percent of the jackpot, and for four of a kind, they will win a predetermined sum. This sum can vary between casinos, so you should check what the reward for winning progressive prizes is.

While it might sound like a standard game where the player compares cards with the dealer, the Caribbean Stud offers so much more. The rules are a lot simpler, and there are fewer rounds that you need to play. Finally, it is one of the rare versions of poker where you will play against the dealer and not against other players. Furthermore, the game is exciting because there are no options for deception or bluffing.

The popularity of Caribbean Stud is only rising, and this fast-paced game can offer so much. Unfortunately, you won’t have a chance to win millions like in Hold’Em. The maximum bet can vary between each of the casinos. Most casinos in the U.S. will offer Caribbean Stud.